Chapter 4: “...Who, father, am I suppose to protect, old Chinese ladies in Chinatown?  Poor little white boys who don’t know how to fight?  Just our family?  Who, father, if not my friends and a vulnerable people?  Did you forget them?  Despite what you say now, I know in my heart you didn’t.  I know because, unwittingly or not, you taught me that way.

“If I had done nothing, I would be neither a doctor nor a martial artist.  I would be nothing because they have been my whole life.”

Chapter 2: “...Here is a paradox or a piece of irony that sounds like self-pity but I don’t mean it to be.  My great passion for elegant women has always interfered with my relationships with such women.  Oh, my young friend, no man has ever lived who has had the elegance of a healthy, beautiful, and intelligent young woman.  If you find one, never let her go.”

Dorton knew the name of one such woman, a name that floated permanently in his ambient air but was concentrated in his wine.  He took another drink of wine and name.

Chapter 6: With Robert, Shamema’s ignorance and desire collided with a shock. Love-inspired sex was a brilliant new world where the stroking of breasts was erogenous and oral sex between healthy, hygienic couples enhanced love-making. New too were the endearments of “honey” and “girls were made of sugar and spice and everything nice” and the knowledge a woman could be so sweet to a man, so desirable, to make him as insanely in love as a woman could be. The sight of a man, her lover, showing great love was a bewildering ecstasy.

Chapter 10: To tempt the agent into a strike, Robert lowered his open hands to the front of his groin and moved towards the man. The agent bit. He darted forward and tried a straight punch to Robert’s face with his right fist while the left was prepared for a second punch to the chest. Robert blocked the first strike with a move from bō shŏu (pushing aside hand) in which he raised his left hand upwards and inside the punching arm, grabbed it, and pulled it down to his left. While pulling the arm downwards, Robert made two simultaneous moves from gōu quán rèn jìn (hooking fist knife advance): A hard kick to the agent’s shin just above the ankle with his right foot and an upward punch to the man’s chin. To be effective, both movements had to be synchronized and exceptionally fast. They were. Robert’s right foot landed on top of the agent’s left foot and pinned it to the ground. The force of the chin strike caused the man’s body to lurch backwards but not far because Robert still held his right forearm and pinned his left foot. Robert’s right fist rose above his own head and came down, elbow first, into the man’s upper chest. At the same time, the agent punched Robert in the lower right side of his chest. The strike had little power because of their closeness and the man’s lack of balance.

7. The Law of Change

10. The Shadow of Tian’anmen

13. Controlling the Earth I

14. The Definition of Spite

The Vengeance of Superior Men is a political/action novel that builds on the characters and storyline in The Superior Men of Xinjiang (though the story will also stand on its own).

Robert Jiang, a Chinese American doctor and martial artist, faces the mounting consequences of exposing the Chinese Communist Party’s (CCP) attempts to use an environmental disaster against the large Muslim minority in the vast resource-rich Xinjiang Autonomous Region.  In that expose, Robert was aided by a native Uyghur doctor, a young Uyghur-Chinese woman, a Chinese friend, and a Special Operations Group (SOG) of the National Clandestine Service.  After initially rejecting Robert, the young woman, Shamema, accepts him as her lover, and together they fend off attempts by the Chinese Bureau of Insurgency Elimination to kill them.  To protect Shamema and his family, Robert rejoins the SOG to shutdown the Bureau.

International condemnation of the CCP’s actions in Xinjiang and Tibet, economic woes, and the damaging trial of a student blackmailed into aiding the Bureau weaken the iron grip of the Beijing government on the mainland.  The Party’s belief that the “inferior can defeat the superior” through a set of deceptive strategies (called since ancient times Assassin’s Maces) lead it to the brink of war with America.

It sets for us a marvellous ideal, that of the Chüntzû [Jûnzĭ] or Superior Man—one who is perfectly self-controlled and self-sufficient, wholly free from self-seeking and able to stand firmly and serenely among forces which toss lesser men to and fro like shuttlecocks, despite their tears and screams.  [John Blofeld] 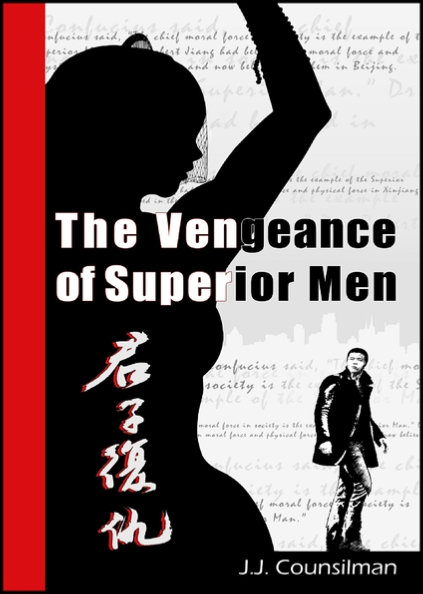